In 2012 they opened a franchise in the small shopping mall on the northeast corner of Harmon & Las Vegas Boulevard. This is the location we like the most. We’ve enjoyed quick meals there several times since this location opened and every time the place was clean, the food was fresh and the staff friendly. Enjoy entrees like Orange Chicken, Black Pepper Chicken, Mandarin Chicken, Beijing Beef, Peppercorn Shrimp, noodles and veggies. A complete meal with a soda will cost you between $7 and $10. 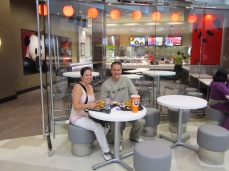