Pin Up: The Art of Sexy
A burlesque show starring Playboy 2011 Playmate of the Year Claire Sinclair

In March 2013 we attended one of the first editions of Pin Up. We had seen some online advertisement for this new show and decided to see it since we were staying at the Stratosphere for 2 nights. Pin Up is a classic burlesque show inspired by the classic pin up calenders of the 1940s, ‘50s and ‘60s. It’s features a live band, singers and dancers wearing classic pin up outfits.

We didn’t really expect an artistic performance or storyline so we weren’t really surprised when we found out that the show wasn’t exactly one of Shakespear’s masterpieces. We arrived at the Stratosphere showroom 30 minutes before the start of the show. The first thing we noticed was that the pricing for beverages was very reasonable. At most of the Vegas showrooms you will pay up to 50% more for a soda than at the Stratosphere showroom. 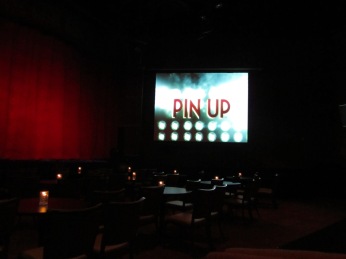 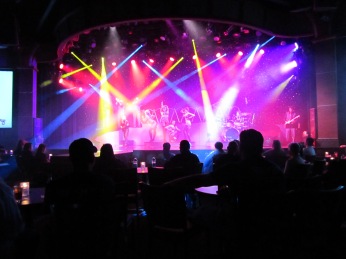 We were seated at a booth in the middle of the showroom so we had a good view of the stage. Claire Sinclair is the one attracting the crowd (obviously), the rest of the crew deserves most of the credit for the show’s quality. Claire is not exactly a talented dancer so here dance moves were limited and simple. The quality of the singers and dancers was actually a lot better than we expected. We were pleasantly surprised. Definitely when you take into consideration that the show had been running for just a week. Yes, there were a couple of mishaps during the show but that was understandable, If you attend the show now, we expect it to run smoothly.

Between the songs, Claire tells her life story and how she got fascinated with the pin ups from the past. She tells visitors a little bit about how she grew up and what made her decide to pose for Playboy. Her personal stories are “glued together” through song and dance. The singers have very good voices and the dancers had the skills and choreography you’d expect of a Vegas headliner show. The performers wear classic pin up costumes that fit the style of the show. All in all, it was very entertaining. Don’t expect nudity because if you’re into that you will have to find a different burlesque show (we do feel sorry for all the men out there who love Claire Sinclair and her great figure).

After the show there was a photo opportunity with the cast of the show. Of course we took our chance! The cast was very friendly and chatty. We took some pictures with them and they personally thanked everybody who approached them for coming to their show. That was a nice bonus and we were glad we went to see the show.

Regular ticket prices are about $55 but when you’re staying at the Stratosphere you will receive 2-for-1 tickets. We think that’s a great deal because at that rate, this show is a steal! Go see it…