One of the interesting sites to visit outside the Las Vegas city limits is Hoover Dam. It’s an impressive piece of construction escpecially when you think about the fact it was built in the 1930’s during the Great Depression. Some of the techniques that were used to build this enormous concrete structure were new. Thousand’s of workers were involved in building the Hoover Dam and 122 lost their lives during the building process.

The dam was constructed between 1931 and 1936 and completion was reached two years ahead of schedule. Taking the new techniques that were used and the tough weather conditions in the middle of the dessert into account, one can only conclude that the workers who built Hoover Dam delivered an unmatched accomplishment. 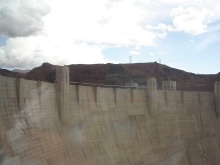 When driving from Las Vegas to Hoover Dam you go through Boulder City. Boulder City is a municipality that was originally constructed to house the Hoover Dam workers. Before Hoover Dam got its official name it was called Boulder Dam. After a period of controversy Hoover Dam was named after President Herbert Hoover although critics state he had little to do with building the Hoover Dam.

The recipients of the power generated at Hoover Dam: California, Arizona and Nevada. Approximately 5% of the power gets sold to Native American tribes. Hoover thoughout time also converted into a major tourist attraction. Close to one million people visit and tour the Dam every year. So, if you’re planning a trip to Las Vegas, don’t forget to include a trip to the Hoover Dam.

We’ve visited Hoover Dam several times and somehow we’re impressed every time we visit. We took a guided tour through Hoover Dam and its power plant and it’s very impressive to hear how the entire system works. You take an elevator deep down into the heart of the Dam. When you walk through the corridors you can see water dripping down the walls. It’s a strange sight at first bacause you’re tended to think the dam is leaking but as our guide explained, this seemed to be completely normal. The guided tour also takes you into the power plant where you can see the turbines that generate the power. All in all, a very impressive experience.